The Coronavirus and resulting economic shutdown have dominated the news cycle this year. Now the uncertainty spotlight is shifting towards the upcoming election. With November 3rd fast approaching, we thought we would share some context for investors.

In short, the stock market and political party control have shown very little correlation to one another historically, certainly not to the magnitude of investor trepidation that often precedes elections. Here are eight points to be mindful of heading into November and thereafter:

From 1926 through 2019, the S&P 500 averaged 9.5% annualized returns under Republican presidents and 14.8% under Democratic presidents. Very often the successive market returns are more contingent on when a president takes over in the economic cycle, not necessarily their own economic policies. Either way, the market has mostly risen under both parties’ leadership.

While it may seem that election years should provide more volatility and potentially lower returns for the stock market given heightened levels of uncertainty, that has not been the case historically. As shown below, the average returns are marginally higher during election years (8.9%) vs. non-election years (8.1%) since 1860, with no real correlation to changes in party control.

It would be hard to convince someone that regardless of who wins in November that market volatility will not pick up around the election, that even seems probable to us with the potential for delays and skepticism from both sides caused by mail-in ballots.

Surprisingly, that has not been the case historically. If you went back in time, you would find plenty of issues for investors to fret about heading into an election, just as we have this year, but higher market volatility did not transpire in most cases. Since 1964, the S&P 500 had a 13.8% annualized volatility in the 100 days before and after the election vs. 15.7% annualized for the full period. 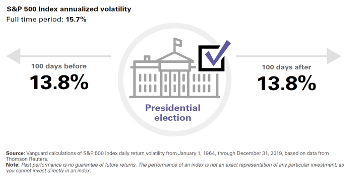 The coronavirus was a black swan event, not a result of specific economic or monetary policies gone awry. Nevertheless, the U.S. is still coming out of a recession in the first half of this year caused by the forced economic shutdown. Historically, regardless of the catalyst, a recession in the 2 years before a re-election cycle has been a bad indicator for the incumbent president. We would also note that this sample size is still relatively small statistically speaking. 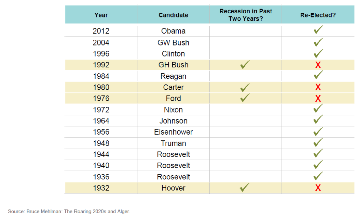 The House is widely expected to stay under democratic majority, while the Senate remains a toss-up. Regardless of who wins the presidential race, it may be best for both parties to hope for a divided government as it relates to their investments. Historically, a divided government (House/Senate/President) has resulted in higher returns than a unified government. The market appears to appreciate some checks and balances for preserving a bit of the status quo in government policy. 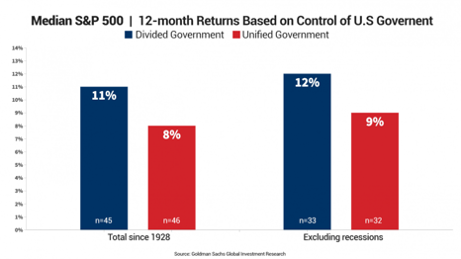 You only need to look at recent history to see why fear regarding new presidential policies is often exaggerated. Courtesy of Hartford Funds3, here is a snapshot of what critics said about newly elected presidents and what transpired in terms of economic growth and stock market returns during their respective presidencies. In the long run, the economy and market will be fine no matter who gets elected.

Just as the incessant fear surrounding the coronavirus caused investors to flee stocks in March & April of this year, the negative undertones of political advertisements and debates often makes investors skittish during election years. Investor flows to money market funds (cash) are often the highest during the latter part of the presidential term as investors grapple with the uncertainty of potential change. Investors then pour money back into stocks in the inaugural year as uncertainty subsides, most often at higher prices.

This year, we have seen record outflows from stocks caused by fears from the economic shutdown. It is also evident that some investors are content to “sit on the sidelines” until after the election. The difficulty with that strategy, or any other market timing strategy, is that it is always much harder to decide when to get back in. There will always be something new to worry about, even after the election is decided.

Elections matter, just not as much as you might think for your investments. Stocks and political leadership have shown very little correlation at all over the long-term, and far less during election years than investors, news outlets, or politicians themselves choose to extrapolate. Stocks have a much higher connection to monetary policy, financial conditions, and underlying growth in Corporate America. Not even the most criticized or lackluster of politicians have been able to change that momentum thus far, and we do not expect that to change.