A Market Commentary - "Sell in May"

Hoping everyone had a great weekend and your summer is treating you well.  From an investment perspective, we are fortunate that the markets continue to provide strong returns, but some uncertainty about overly frothy equity markets and potential inflation are starting to creep into daily conversation.

The Fed has a two-day policy meeting this week before they meet again in August in Jackson Hole where Chairman Powell will most likely speak on the Fed plans.  The Bloomberg survey of 51 of the top economists in the world showed that about half believe that the Fed will begin to raise rates in 2023 with at least one increase.  The remainder are forecasting the Fed to raise rates starting in 2024. The survey participants don’t see the Fed as being in a huge hurry to scale back economic stimulus, but recently higher inflation numbers have shifted the focus to economic risk as being the most concerning.  About 65% of participants saw the biggest concern as an overheated economy.  The big question is if the Fed will view inflation as just transitory due to Covid supply-chain interruptions, or if inflation from the unprecedented stimulus is starting.Down the road, but meaningful, Chairman Powell’s term as Fed chair expires in February.  About three quarters of economists see Biden keeping him on the job.  He hasn’t commented on if he will accept, if offered.  The next most likely candidate is Lael Brainard, who is about as dovish as Powell, but is a Democrat unlike Powell. (Yoo, & Matthews, 2021)

The old saying of “sell in May” dates back at least to the 1930s. The concept is that May through October is a relatively worse time to be invested compared to the other six months of the year.  Statistically, this has actually been correct on the surface shown in an extensive research project that looked at all available stock market data around the world dating back to the year 1693?.  The Dow Jones Industrial Average, over the last 120 years, has seen a summer selloff of some degree almost 90% of the time. However, this figure includes some drastic years like 2008 and 1987.  In about half of the years, the average pullback was about 5% (Arends, 2021).

From a realistic perspective, managing an investment philosophy based on a rhyme probably isn’t the most well-thought-out strategy.  Additionally, if there is such a thing as a summer sell-off, this presents an opportunity to deploy cash that might be on the sidelines or reinvest dividends.  As part of an overall portfolio, we expect ups and downs and as investors, we look at the overall goals of the portfolio.  Coincidental or real, a small pullback in the markets is not something that should be alarming and is a healthy function.   Market timing is not part of the overall portfolio strategy and only works until it doesn’t.

“Sell in May” hasn’t proven true this year for most major indices as May was a positive month.  The Nasdaq, however, did have a negative month.  We would be speculating on the next five months and would have missed out on upside by trying to take an overly short-term view. 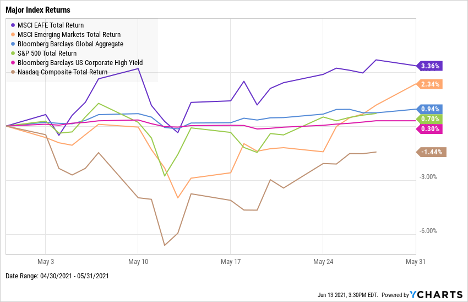