Q2 of 2020 marked the worst of the fallout from the Virus, as illustrated by the start of the shutdowns, historic levels of unemployment & job losses, hundreds of thousands of deaths, and numerous bankruptcies. So last Thursday when the US government reported that GDP contracted by a horrific rate of 9.5% in Q2, it did not come as a surprise. On the contrary, strong earnings from 4 big tech firms came to the surprise of many market participants.

Last Wednesday, the CEO’s of Silicon Valley’s powerhouse firms and arguably 4 of the most powerful executives in the world –Apple’s Tim Cook, Amazon’s Jeff Bezos, Facebook’s Mark Zuckerberg, and Alphabet’s Sundar Pichai (Google) – spent north of 5 hours being virtually grilled by congress over their market power after a yearlong anti-trust investigation. In written testimony and in their responses, the CEOs told Congress that competition is thriving across the tech industry and consumers are benefiting. Despite this, the primary motivations for investigations into each firm are highlighted below:

The following day, the 4 tech giants saw their combined market value soar by ~$250 billion due to shockingly impressive earnings where each firm beat Wall St. expectations. Together, the 4 companies reported revenues of ~$206 billion & net income of $29 billion for the 3-month period ending in late June. To summarize the earnings day for each individual firm: 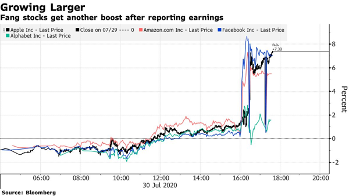 These results brought the aggregated market-cap of these firms to a whopping ~$5 trillion… with a ‘T’ as of the end of last week.  For context, that’s about a 1/5th of the entire S&P 500. YTD, the average S&P 500 stock is down slightly over 6%, while the FANG index is up well over 30%.

Politically, this could reinforce suspicions that growth in U.S. technology providers has become unhinged, while Old Economy industries are pushed closer into insolvency. Given this backdrop, these 4 firms were sure to temper their excitement on their earnings calls, focusing less on their outstanding earnings and instead highlighting the important ways in which they were helping the economy. This included contact-tracing partnerships, deployment of masks & other needed equipment, increased hiring, employee safety, & the importance of their platforms to the survival of small businesses.

Regardless, these solid results are a validation for bulls who have bet the industry would emerge from the pandemic stronger than the rest of the market due to the acceleration of trends in their favor as locked-down consumers use tech gadgets and the internet for entertainment, social connection, shopping, learning & work more than ever.

With the economy, markets and life seemingly carrying more unknowns than usual, it’s hard to confidently say what comes next for these 4 firms - but one thing seems certain, shareholders of these stocks are in for quite the ride.