A record 4.8 million jobs were added to the U.S. economy in June, bringing the unemployment rate down to 11.1%, from a peak of 14.7% in April. Over the past two months, 34% of the 22.2 million jobs lost from February to April have been recovered.

Temporary layoffs have also declined 7.5 million, or about 43% of the February-April increase.  Labor force participation ticked up to 61.5% in June, with 3.1 million workers having returned over the past two months. 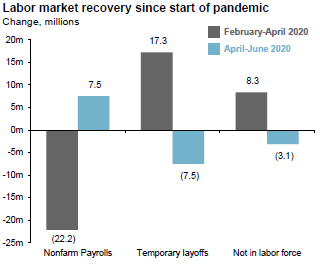 It is an encouraging start to the recovery, but an unemployment rate above 10% is still a big number. Keep in mind that the unemployment rate peaked at 10% in the Great Recession which was, at the time, considered to be the worst economic downturn since the Great Depression.

In terms of industries, the biggest gains have come from those that were hardest hit, most notably leisure and hospitality. These businesses remain under severe pressure, and likely will continue to be in varying degrees for the next couple years. 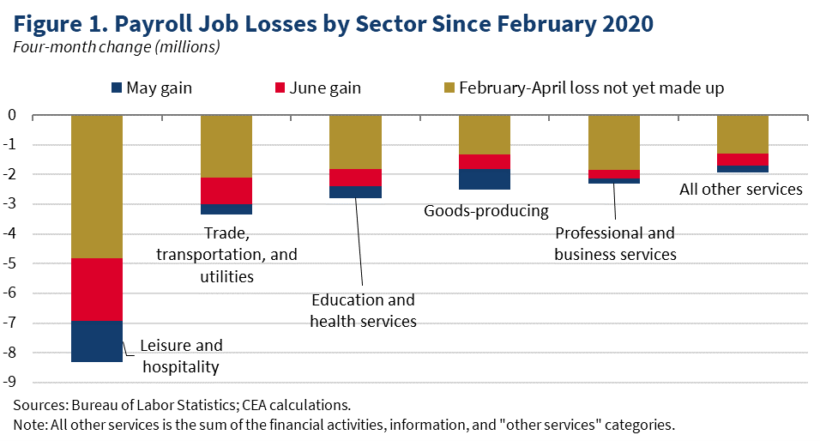 Another positive sign for the U.S. economy was the Institute for Supply Management’s (ISM) Purchasing Manager Index (PMI), a leading indicator for U.S. industrial activity, which recovered back into expansionary levels (above 50) in the June report. Such a sharp recovery is unusual compared to past recessions, another sign of how this economic recovery is likely to be unique compared to prior downturns.

Along with some encouraging vaccine news from Pfizer, the positive economic data was enough to send stocks higher for the week with the S&P advancing 4.1%. Since early June, the major indices have alternated winning and losing weeks, which is not a surprise given the conflicting trends of sentiment from the virus & economic recovery.