NFTs, or non-fungible tokens, have garnered a lot of attention recently due to their high sales volumes, which have topped $300mm in the past month. Most notably, the digital collage, “Everydays: The First 5,000 Days” (shown below), was bought by a digital asset investor for over a whopping $69mm. 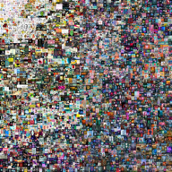 So what are non-fungible tokens, exactly? Put simply, they are a blockchain-based certificate of ownership over a piece of digital content (digital art, memes, sports clips, tweets, etc.). When someone wants to create an NFT, they “mint” it, creating a file that lives on the highly secure blockchain, where it illustrates key information, such as the creation date, number of copies, sell dates, purchase prices, and previous owners.

Fungibility plays a huge role in the economics of this asset-class. An example of a fungible digital item is Bitcoin, since any 1 bitcoin can be exchanged for another, whereas NFT’s cannot. Proponents of NFT’s argue that the unique, non-fungible nature of the digital asset creates scarcity, and therefore value.

But hold on, I’m confused - anyone can replicate digital content an infinite number of times, so how are NFT’s scarce? Good question, let me try to clarify through the art example above.

Before NFT’s, there was no way to create the perception of scarcity or value in digital art - therefore, there was no market - that has completely changed. The digital copy of Beeple’s art above, which someone paid over $69mm for, can still travel freely across the internet with an infinite number of replications, but there is only 1 (or however many the creator specifies) real and original image, which confers uniqueness. Counterintuitively, the more a file is shared across the internet, the more cultural value gets built into the digital piece, potentially increasing the $ value of the NFT.

This may not make any sense, but it is relatively similar to fine art, baseball cards and other collectibles in the real world. For example, famous artworks vary widely in price depending on whether it is the artist’s original, a copy with a signature, or a cheap print out from your home desktop.

NFT’s are certainly not exclusive to the art world: The NBA launched ‘Top Shot’, a marketplace for highlight reels sold through NFT’s, which has garnered over $230mm in sales; a Youtuber, Logan Paul, sold more than $5mm of pokemon-like cards featuring cartoon caricatures of himself; plenty of artists are selling NFT-based albums to fans at lucrative amounts; and many more. This makes sense in the creator and fan economy, since a creator minting an NFT gives superfans another avenue to express their affinity.

In addition to being able to monetize their digital assets, a major upside for creators/artists with these tokens is the ability to add “smart contracts,” which can guarantee a creator a portion of the proceeds for each additional sale, which is made seamlessly by the Blockchain. In Beeple’s case, he receives a 10% royalty for every transaction made for the rest of the asset’s existence.

In short, the benefits of the asset’s uniqueness/scarcity, the security of the blockchain to store the asset from theft, the ability to ensure authenticity, and the powerful ability to connect creators and fans without gatekeepers are just some of the major drivers of the NFT phenomenon.

None of this is to say that NFT’s don’t have flaws, as they most certainly do, or that people should go out purchasing them - I know I certainly won’t be, but there’s certainly more to the space than initially meets the eyes.

I went into writing this piece with the expectation of elaborating on how silly NFT’s are - comparing them to the likes of Gamestop & other ‘Meme’ stocks, but I came out with a different conclusion. Namely, the main critique of meme stocks was essentially that their price became disturbingly detached from company fundamentals, which shouldn’t happen to that degree in the stock market. However, collectibles have never been bound by the same rules - so why should NFT’s?

It’s hard to get into a mind of a super fan’s purchase for something I believe to be silly, or to imagine having the disposable income and desire to purchase a collage of a digital pictures for $69mm that I can find in google images, but weirder markets have thrived for longer periods, and after digging into the space a bit more, I wouldn’t be surprised if NFT’s have more staying power than the masses are currently giving credence to.

As Economist Tyler Cowen said, “if the internet really is changing everything, why should the art world be immune? Maybe the crazy ones are those who expect the future to look just like the past.”